Although they were the number one seed going into the game, the Royals were not going to just hand them the championship. The Panthers had their work cut out for them, despite their 22-9 win over the Royals earlier in the regular season, Sept. 15. 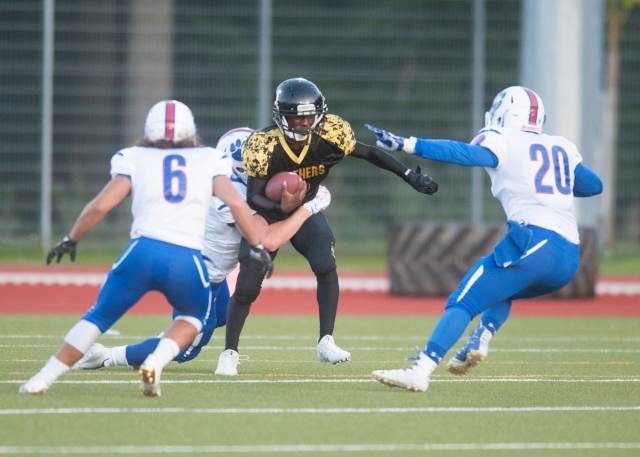 The Stuttgart Panthers football team, lived up to their growing reputation on Friday night with a 22-9 victory over the defending Division I champion Ramstein Royals in the first week of divisional football competition Sept 15, 2017.

Stuttgart coach Billy Ratcliff gave credit to the Royals defense that tamed the Panthers running and passing game in the first half. “They blanketed our passing game and we weren’t able to run on them as effectively as we did earlier in the season. We made some offensive mistakes early in the game that gave them a short field and they capitalized, but we were resilient and didn’t quit.”

“Our defense played well in the second half and came up with some key stops, and our offense made some key plays in the passing game to open things up,” Ratcliff said. During the second-half, the Panthers started controlling the game.

“We looked for opportunities to control the clock, move the chains, and although it wasn’t pretty, we had a 17-play drive that kept their dynamic offense off the field for much of the 3rd quarter,” Ratcliff said.

After falling behind 21-20 hallway through the fourth quarter, running back Devon Burton took a handoff from quarterback Chris Magalona and ran down the middle of the field helping to seal the Panthers’ victory over the Royals.

Burton summarized the postgame feelings of his teammates in a Stars and Stripes interview, “It’s expected,” Burton said of the Stuttgart title. “But we’re humble.”

Ratcliff explained that a lot of time, effort, hard work and creative chemistry is what it took to archive the championship title and an undefeated season.

“Players who felt the team had underachieved the previous year worked hard in the off-season to change that attitude into a winning mentality,” Ratcliff said. He also explained it wasn’t just the hard work of the players that made it a winning season. “Coaches put in hundreds of hours of film review and preparation in addition to the actual practices and games.”

In a team sport, it’s not always about individuals, but what is best to make a team successful.

“Putting players in the right position to help the team and not necessarily what best showcases what position a player wants to play means selflessness and that had a huge impact on our success,” Ratcliff explained.

By becoming the 2017 DoDEAEurope’s Division I champions, the Stuttgart High School football program delivered to the community a second title in three seasons.

“The undefeated season and also on winning the championship reflects favorably not just on the players, managers, and coaches, but the effort and support of the parents and community,” Ratcliff said. “I think winning the football championship two of the past three years brings the program to the level of respectability of perennial powerhouses Wiesbaden and Ramstein. ”